CLI (Caller Line Identification), aka ANI (Automatic Number Identification), is the From header in SIP and represents the senders number in a telephone call. It is the technical term for the mechanism we know as Caller ID. In VoIP systems, CLI is more than just a way to display the number of incoming calls. It is used as a defense against unidentified call attempts, provides information to sort incoming calls, and is an important component of billing.

In ConnexCS, CLI allows you to restrict and manipulate CLIs and Pre-Asserted Identity on customer calls, so that any caller without a valid match is rejected outright.

How is CLI derived?

CLI refers to the CLI/ANI field in the From part of the SIP INVITE message. This contains specific information about the caller, particularly the name and number of the person initiating the call. Also known as "Caller ID" in standard phone systems, CLI may also be referred to as "A-Leg" or "A-Number", where the call originates. The call is then terminated at the Dialed Number, the "B-Leg" or "B-Number".

By default, a customer account will pass all calls, even without any configured CLI records. To change this behaviour, navigate to Management Customer [Customer Name] Edit Verification and enable Approved CLI's Only. 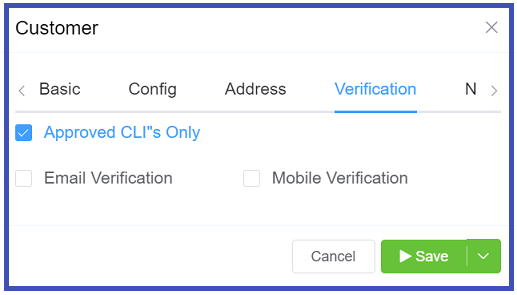 Once the first CLI rule is entered, the behaviour changes to block all, regardless of the "Approved CLI's Only" setting.

In addition to changing the default behaviour to block, adding a CLI rule gives customers the ability to verify their own CLI's from their Control Panel through a call back system. A customer can login to their portal and enter a phone number which should belong to them. The ConnexCS system will place a call and give a code which must be entered into the portal. If the codes match the CLI will be added.

If you wanted to allow all calls, but assign a specific number (such as the Main Billable number for the business), you would set CLI as ".*" then enter the desired P-Asserted ID. All calls will then have this number as the P-Asserted-ID. 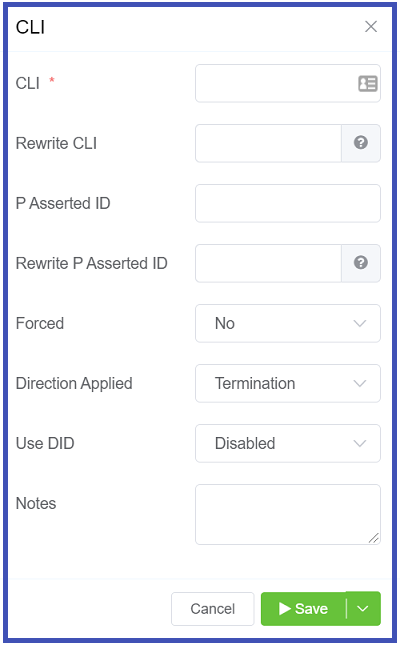 Configuring a number as a CLI in ConnexCS gives the customer the ability to control which numbers are allowed to initiate calls. Any number configured as a CLI is considered part of the Whitelist (unless additional configuration is applied to block it).

Allow multiple CLIs to pass (by entering 2 or more records):

Allow a range of numbers for a customer (this example allows all calls that start with 123456 to pass regardless of the last digits):

You could also use a more complicated expression to match multiple ranges. In this example the number must start with 123456, followed by 1, 3 or 5, then followed by 1 or 2 numbers.

This can be used in combination with number lists as well.

If your customers do origination as well as termination, they already have a list of DIDs. Select Filter from "Use DID" to automatically read from the list of DIDs. Note you can still add additional CLIs along with the DID list.

Filter PAID by Number or Pattern¶

The same is true for Pre-Asserted-Identity as it is with CLI, you can filter by PAID, as in this example.

We can also completely replace the CLI being sent. Note that if a replacement is done it also means that the match is successful and will be allowed to pass though.

When choosing Force CLI, if there is no match present, the CLI marked Force will be used to replace the CLI being sent on a call. In the example below the CLI 111111111111 will be sent regardless of whatever CLI the customer sends.

To filter or replace calls with a larger amount of CLIs, or to perform more complicated rules, use Scriptforge to write a custom application reading from a database to accomplish much more comprehensive solutions.

This example shows how to pick a DID already associated with the customer at random for use as the CLI.

Pick CLI from DID with Longest Match¶

Sometimes it can be useful to retain all or part of the CLI being sent manipulate it when it gets sent out.

Normalizing is the process of using a common number format. For ConnexCS, this is the international format. You should not be using CLI Manipulation to correct the format or a number, this should be done by Parameter Rewrite (see Number Manipulation for details).

This may be a little complicated so we can break this down:

In the Rewrite CLI section, 44 is the literal 44 digits, and $1 will contain what has been matched in the previous stage.

You can use all or part of a sent Pre-Asserted-Identity as the CLI. The following example shows how to capture all.

In addition to the matched group as above, we have the expression (?<paid>.*). Here, paid represents a variable where this information is stored, it is then available in the CLI rewrite scope as $<paid>

Numbered groups (e.g $1, $2) will only be read from the CLI and will be available in CLI rewrite or in Pre-Asserted-Identity Rewrite. Named groups can be read from, and used, anywhere.

Manipulate the P-Asserted ID similarly to how we manipulated the CLI. In this case, we must use named groups, and still have to match the CLI to allow the call to pass. As before 9123456789 in the Pre-Asserted-Identity will become 4423456789.

If we want to use the CLI in the Pre-Asserted-Identity it is a little easier as we can just use the numbered group.

The CLI system uses Regular Expressions to match and replace numbers. Here are a few examples:

To learn more about writing regular expressions, visit RegExr for tutorials and exercises available for all levels of expertise.

ConnexCS is GC6 compliant for end users, which:

requires Communications Providers (CPs) to provide CLI facilities, and ensure that the CLI Data provided with a call includes a valid, dialable telephone number which uniquely identifies the caller." For details on this General Condition, including guidelines for "valid" and "dialable" numbers, see OFCOM's Guidance on CLI Facilities.

To set the "P-Asserted-ID" per customer, see Configure CLI above.